How to Play (brief)

In NumZumZero, players are dealt cards from two suits, orange and blue. Each card has a face value. The play area consists of three columns and players take turns playing one of their cards in one of the columns. When the total face value of blue cards matches the value of orange cards in the same column, the player who played the last card collects all cards from the column and earns points. 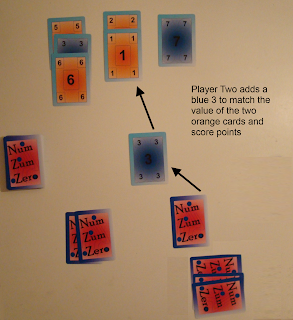 Other sites by me